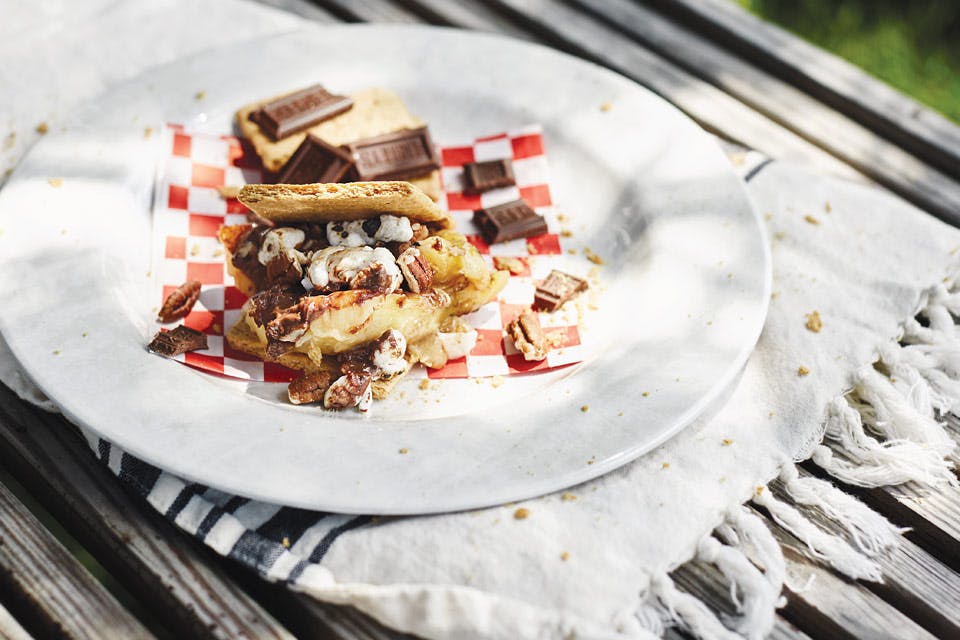 When William Davis found himself in the woods without graham crackers, he went off script with delicious results — since there may be no greater capper to an outdoorsy day than a fire-roasted s’more. While there is plenty of room for funky twists on the classic creation, which features roasted marshmallow and squares of a Hershey’s chocolate bar sandwiched between two graham crackers, sometimes you have to improvise. “[It] was actually a collaboration between myself and a fellow camper,” Davis recalls. “We split the banana down the center and put the fillings we had inside the banana, and then just put it right by the fire and let it melt.”

DIRECTIONS
Split the two bananas lengthwise without cutting completely through the bottom of the peel. Pull apart each banana, again taking care not to completely separate the halves. Stuff the inside of each with pecans and pieces of chocolate. Cut the marshmallows into pieces and sprinkle on top of the nuts and chocolate. Place each banana in an aluminum-foil boat, cover and set next to the fire or on a roasting rack suspended above the coals. Cook for 5 to 15 minutes, depending on heat of fire, and remove using tongs. The cooked banana mixture can be scooped from its peel and placed in between two graham cracker halves or simply enjoyed with a spoon.